Back on form with Cornwall’s biggest food and drink festival! 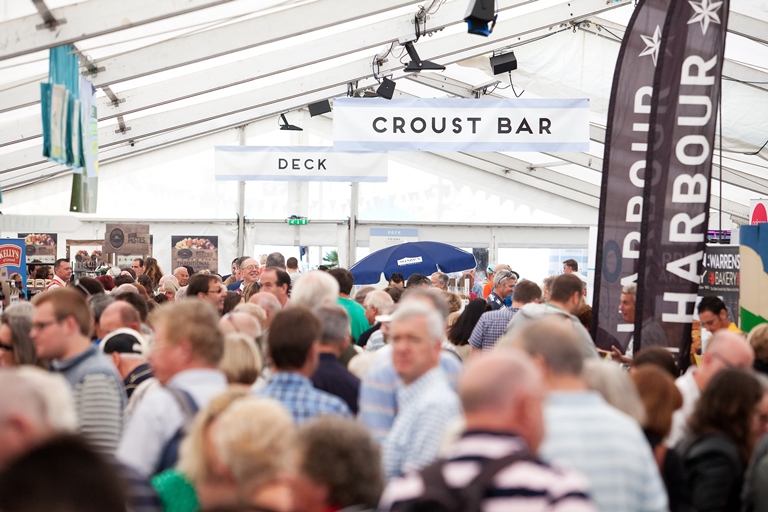 We were so pleased to welcome over 40,000 people in Truro this weekend for the Great Cornish Food Festival, held on Lemon Quay this past weekend. Now in its eleventh year, the Great Cornish Food Festival is still proud to be the largest event anywhere dedicated to food and drink that’s been produced or grown in Cornwall or the Isles of Scilly, and this year, we unveiled our brand new look for the now-iconic marquee in the centre of Truro (as seen at Royal Cornwall Show but on a sliiiiightly bigger scale this time!)

Over 60 food and drink exhibitors took part in our festival this year, and we welcomed more new faces to the exhibitor lineup than ever before. More than 40 chefs and food experts graced the two demonstration stages across the weekend, including the ever-splendid Nathan Outlaw, Fifteen Cornwall’s Andy Appleton (who was onstage with a graduate of the Fifteen Cornwall apprenticeship programme), plus first-time appearances for The Seafood Restaurant’s Jack Stein, and the Idle Rocks’ Mark Apsey. The festival opener, a ‘crimp-off’ between BBC Radio Cornwall’s Laurence Reed and James Churchfield with hints and tips from Proper Cornish’s Mark Muncey, generated lots of enthusiasm and debate in the audience about the correct way to crimp – with James retaining his crown as the station’s in-house master-chef.

Frank Linn, Master Butcher at Brian Etheringtons Meat Co., wowed the crowd with a butchery masterclass on Sunday afternoon, raffling off 15 cuts of meat afterwards, with all proceeds going to the Cornwall Food Foundation - our chosen charity for this year.

The Theatre stage was packed out for chef Paul Ripley’s demonstration on Friday afternoon, which featured menu tasters from the newly-Mariner’s pub in Rock, accompanied by food-matched beer samples from Sharp’s Brewery's very own beer sommelier Ed Hughes. The festival’s brand new Deck – a relaxed setting (compered by CFD’s very own Kevin Gray-Roberts) in the Croust Bar in which festival-goers could learn everything from Danish pastry-making to the finer points of gin-tasting – was a huge hit this year, and we’ve already had lots of enquiries about extending the timetable for next year’s festival.

In the Discover Zone, children were able to take part in plenty of tasty activities, from smoothie-making with Rodda’s Cream, to veggie printing with Newquay Fruit Sales, along with Dairy Discoveries across the weekend from dedicated volunteers at Cornwall Food & Farming Group. One of the biggest hits of the weekend was pizza-making with the Cornish Pizza Company, who came along to the festival in their unmissable turquoise and orange VW camper, plus of course the oodles of ice cream sundaes that were made with the lovely team at Kelly's of Cornwall.

“It’s been an amazing launch for the new name and new look for the Great Cornish Food Festival”, said our MD Ruth Huxley. “The Festival couldn’t happen without the support from everyone who makes the date in their diary to come along to Truro over these three days, so we’re really pleased that the new look has had such a positive public response. The Great Cornish Food Festival will continue to get bigger and better year on year – and it’s a brilliant way to put Cornish food and drink back on the map.”

The Great Cornish Food Festival’s key sponsor First Great Western were also in attendance throughout the weekend, talking to festival-goers about the company’s commitment to using top-quality produce that’s been sourced within 15 minutes of the railway line, an initiative discussed and assisted by Cornwall Food & Drink. This week saw First Great Western unveil their new link with Cornish tea-growers Tregothnan, which will shortly see over 1m locally-produced teabags on all train services on the FGW network each year.

For a gallery of images from the Great Cornish Food Festival, and to find out more about Cornwall Food & Drink, visit www.greatcornishfood.co.uk/festival

If you came along to the festival this year – please fill out our survey on your experience – it helps us make the festival even better year on year. We’ll put your name in the hat to win a meal for two at one of Nathan Outlaw’s Cornish restaurants: http://surveymonkey.com/s/GCFF2014