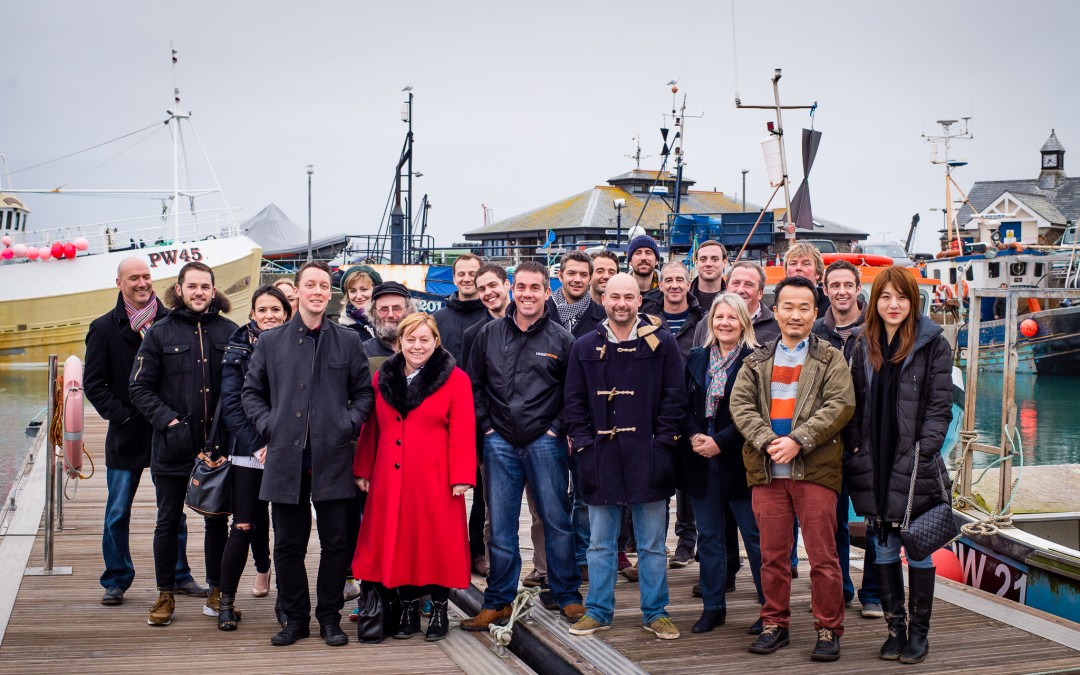 A search for the finest seafood has led a group of top London chefs to Cornwall, in what is thought to be the first initiative of its kind.

Along with 12 other chefs and restaurant owners from the capital, Yoshinori Ishii, executive chef of the prestigious Mayfair restaurant Umu, widely regarded as the best Japanese chef in the UK, met with day boat fishermen from Padstow to discuss how they might be able to help meet London’s demand for fish of the highest quality.

Yoshinori told the fishermen that, since his arrival in Britain four years ago, he has scoured the country looking for the best fish and is convinced that Cornwall is the place that can meet his needs.  He is already supplied by Kernowsashimi, the business of father and son team Chris and Dylan Bean from the Lizard (known to many for their popular fresh fish stall at Truro Farmers’ Market) but is looking for more day boat fishermen to supply him and, in particular, for them to consider adopting the special method of catching and preparing fish, known as Ikejime.

Ikejime produces fish with the supreme flavour and texture needed for preparing sashimi and sushi, as well as other non-Japanese dishes that call for the best quality raw ingredients.  By demonstrating the technique and explaining its benefits, Yoshinori is hoping that other chefs will increase the demand for this type of fish, making it viable for fishermen to invest in the equipment needed to make the technique possible.

It was Cornishman Matt Chatfield who hit upon the idea of collecting the group together after learning of the interest in the Ikejime technique through his contacts in London. Matt lives in the city and, in conjunction with Launceston transport company, Logisthicks, runs a business supplying the best Cornish produce to top name London restaurants and gastropubs. Cornwall Food & Drink helped plan the trip to Padstow, which included a special visit to the lobster hatchery to hear about their Buy One, Set One Free initiative, and dinner for all the visiting chefs at Margot’s restaurant.

Chef patron of Margot’s, Adrian Oliver, enlisted the help of Ben Prior of Ben’s Cornish Kitchen at Marazion for this special one-off evening and the pair prepared a meal using fish from Matthew Stevens and Son, dry aged beef from Philip Warren Butchers of Launceston and exquisite fresh vegetables and salad provided by Sean O’Neill, aka The Modern Salad Grower, from St Martin’s by Looe.  Cornish Orchards cider accompanied Yoshinori’s sashimi and ales from Sharp’s Connoisseur’s Range were selected for the meal by the brewery’s beer sommelier Ed Hughes.

The following day, the group visited Philip Warren’s butchery and Sean O’Neill’s farm. Many of the chefs who made the trip are supplied by these producers via Matt Chatfield’s network and enjoyed the chance to see where their produce comes from.

Speaking of the event, Matt said, “Everyone who came was blown away with what they saw and tasted. In fact, it was such a phenomenal couple of days that many of those who came to Cornwall have already asked when we can organise the next trip.”