Pasties are back in the spotlight – the 2015 World Pasty Championships 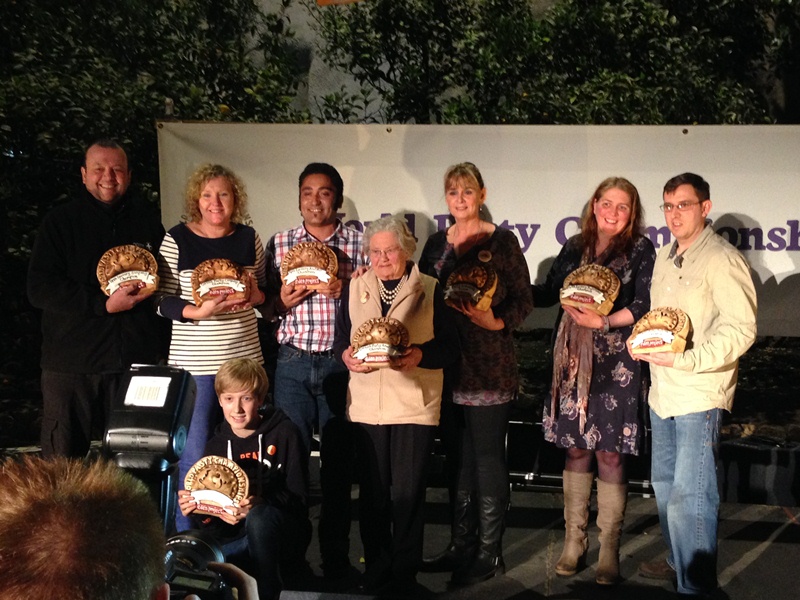 Ask any Cornishman who makes the best pasties and they will almost certainly tell you – “Mother!”  Now one man – John Lethbridge of the Fisherman’s Friends, no less – can rightfully claim that to be true, after his 88 year old mother won the coveted title of 2015 World Pasty Champion in the amateur bakers’ category. Betty Lethbridge, who’s been making pasties since she was eight years old, has become a media sensation overnight as people laud the winning method of passing down a traditional family pasty recipe through the generations.

The annual World Pasty Championships are held at Cornwall’s iconic Eden Project, timed to be as close as possible to St Piran’s Day, 5th March, the day the Cornish celebrate their patron saint of tinners. The day is a high-point in the Cornish calendar, and this year’s competition saw entries from as far afield as Chile and Canada, with over 130 people submitting their creations – some traditional and some not-so-traditional – to the ‘Pasty Pageant’ for judgment.

Big winners this year were the West Cornwall Pasty Company who scooped the top prize for the Cornish Pasty company category for the second year running, and to Prima Bakeries who won the Open Savoury company category for their steak, onion and peppercorn sauce pasty. In the Professional category – which is entered by individuals who work for a bakery – Andy Heath of Proper Cornish won the Cornish Pasty award, while Luisa Ead of the Chough Bakery received the Open Savoury award for her smoked haddock pasty, which scored a phenomenal 97 marks out of 100.

Special mention went to Marion Symonds of Portreath Bakery, winner of the Cornish Pasty Ambassador award for her efforts and success in promoting the Cornish pasty across the world – most recently with trips to Mexico and France under her belt. And with Chilean entrant Jorge Pereira winning this year’s Open Savoury amateur category for a pasty-fied take on a traditional empanada recipe, perhaps an ambassador trip to Chile is on the cards for Marion this year too?!

The day was a fantastic event for the whole family, with a packed timetable of entertainment and demonstrations as the judging progressed, and the awards ceremony held at sundown. A brilliant way to put the Cornish pasty firmly on the world map for both professionals and thousands of loyal pasty fans.